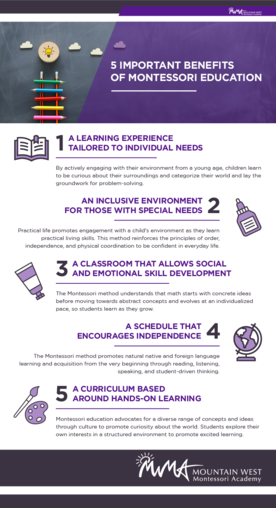 Montessori education is a unique method of teaching that stresses the development of independence in children and eschews more traditional ways of gauging success, such as tests and grades. Institutions like the Mountain West Montessori Academy utilize this system to help youths mature into well-rounded adults who think for themselves. The distinctive approach to educating comes with numerous benefits.

The Montessori education system features individualized learning. Students are allowed to study at their own pace in the manner that suits them, allowing them to reach their full learning potential. They are not forced to slow down to stay with the class as they might be in a typical classroom, allowing them to challenge themselves. They also avoid being forced to progress too rapidly, which would prevent them from properly absorbing the material. Everything is optimized for each child.

2. An Inclusive Environment for Those With Special Needs

Due to the previously mentioned child-centered aspect of the system, special needs individuals can receive the accommodations they need. They are not excluded. In fact, physicist Maria Montessori, creator of the system, initially worked with youths suffering from developmental disabilities and found considerable success before working with neurotypical children.

3. A Classroom That Allows Social and Emotional Skill Development

One Montessori education technique is to place children from multiple age groups together and push them to collaborate. This teaches them to interact with peers that are at different stages of life emotionally, physically, and mentally. As a result, they learn to be open and accepting of differences. It also gives them the chance to grow both emotionally and socially in ways they otherwise would not.

4. A Schedule That Encourages Independence

This is one of the mainstays of Montessori education. By permitting students to direct a large portion of their schedules by choosing what projects to participate in and the duration of that work, the system pushes them to critically consider situations, do things for themselves, and make decisions on their own.

5. A Curriculum-Based Around Hands-on Learning

Another critical aspect of the Montessori education strategy is the substitution of more hands-on, concrete lessons for lectures on abstract concepts. Through this, students learn from easier-to-grasp practical activities while gradually gaining an understanding of more conceptual ideas on their own.

The Montessori education system focuses on each child as an individual. It results in well-developed, independent students who are quite capable in terms of decision-making and socializing.

For more information about how a Montessori education can help your child, contact Mountain West Montessori Academy!

What is a Montessori School?

Why is Montessori Education Important?

Are There Montessori Schools in Utah?

Why Should I Enroll My Child In a Montessori School?

Montessori Schools: What Sets Them Apart?

Why You Should Choose a Montessori School

What are the Differences Between A Public School and A Montessori School?

What Are Montessori Teachers Roles in the Classroom?

TO OUR NEWS FEED

Serving K-9 students as a tuition-free, public charter school based on the globally-established Montessori philosophy of education.